Back to News
Posted on February 6, 2018 |
Categories Meetings

MatTek scientists authored and presented nearly 40 posters at 9 conferences in 2017, and we’ve compiled a list of the top 5 requested posters. Topics included corneal drug delivery, validation of medical device testing methods, drug-induced toxicity in a human small intestine model, and inhalation toxicology.  Browse our reference library for more information on how our models are being used in these research fields. 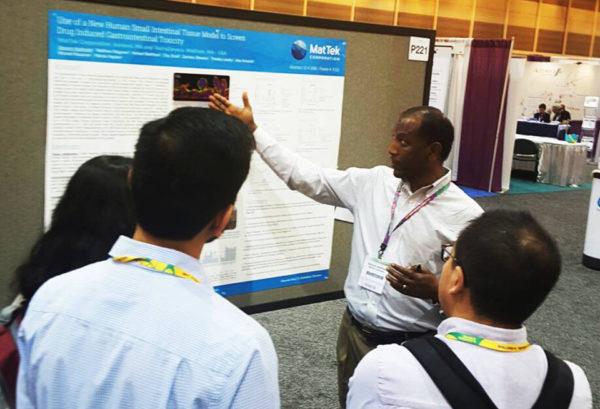 Skin hydration is vital in maintaining the barrier function of skin. Moisturizers, including creams, gels and lotions contain substances that both promote retention of water and reduce water loss from the skin. Current moisturizer product development is limited to expensive and highly variable human clinical studies and cell-based models which lack relevant tissue structure and function.  In addition, cell-based models restrict potential test compounds/formulations due to solubility issues.
In this study, EpiDermFT, an in vitro 3D human skin model, was used to evaluate the skin hydration potential of several commercially available skin moisturizers. EpiDermFT is cultured at the Air-liquid Interface and is amenable to topical exposures of test compounds or formulations regardless of water solubility. Following a 90-minute equilibration at room temperature and humidity, the in vitro skin model was exposed to various skin moisturizers for 60 minutes. Following exposure, the moisturizers were removed and skin hydration was immediately evaluated by measuring the electrical impedance of the tissue surface (DPM 9003 Nova Meter, Nova Technologies). Total RNA was extracted from the epidermis and changes in the expression of genes modulating barrier function were evaluated.
Analysis of skin hydration by electrical impedance demonstrated significant 2-5 fold differences between moisturizer treated tissues and untreated or PBS treated tissues.  Furthermore, although all moisturizers demonstrated increased epidermal hydration, significant differences were observed among the various moisturizers tested.  Altogether, assessment of skin hydration following treatment with topically applied moisturizers in the EpiDermFT in vitro human skin model is a valuable in vitro method for use in product development and claims substantiation studies.

The goal of this study was to validate the biological relevance of an in vitro organotypic small intestinal (SMI) tissue model for predicting intestinal drug toxicity and permeation. A primary human cell-based small intestinal (SMI) 3D tissue model that recapitulates the in vivo counterpart was used to evaluate the apparent permeability coefficient of N = 16 drugs for which in vivo data are available (Biopharmaceutics Classification System).  Toxicity was assessed using transepithelial electrical resistance (TEER), MTT viability, and Lucifer Yellow (LY) leakage assays.  Bioavailability or efflux transport of drugs was analyzed using LC-MS/MS.  The metabolic activity of the SMI tissue model was assessed using specific substrates and metabolites were analyzed using LC-MS/MS.  Test drugs with human absorption of >80% (high permeability drugs) had in vitro apparent permeability coefficients (Papp) of >2 x106 cm sec-1 and drugs with <80% human absorption (low permeability drugs) had in vitro Papp values of <2 x106 cm sec-1.  Using these criteria, the SMI tissue model categorized the test drugs as high permeability and low permeability with a sensitivity of 100%, specificity of 89%, and accuracy of 94% compared to historical human absorption data.  Drug-drug interactions were also examined using efflux transporter inhibitors.  The inhibitors increased drug bioavailability while decreasing the efflux ratio.  Efflux ratios for substrates talinolol, digoxin, and loperamide were reduced by 45%, 40%, and 60%, respectively, in the presence of the P-gp inhibitor, verapamil.  The efflux ratio of nitrofurantoin (BCRP substrate) was reduced by 63% in the presence of the BCRP inhibitor, novobiocin.  Results from drug metabolism studies also showed midazolam (CPY3A substrate) was metabolized (6.5% conversion) by the intestinal tissue model. In conclusion, the SMI tissue model appear to be promising new tool for evaluation of drug safety, permeability, and metabolism.

The mechanisms of off-target, dose-limiting gastrointestinal toxicity for therapeutic compounds are often poorly understood. Lack of physiologically-relevant in vitro models and species differences in intestinal physiology is a challenge for gastrointestinal (GI) toxicity studies. Here, we evaluated the utility of a primary human cell-based 3D small intestinal tissue (SMI) as an investigational tool for drug-induced GI toxicity and wound healing studies. To achieve this goal, a blinded study was performed using N=8 drugs (5 problematic and 3 well-tolerated in humans) for which dog and rat toxicity studies were not predictive of human toxicity. The compounds were tested at five concentrations. Using the in vitro SMI model, we examined cytotoxicity by MTT and LDH assays and tissue barrier integrity using transepithelial electrical resistance (TEER) measurements, following two exposures over 96 hours. The results showed that the SMI tissue detected drug-induced reduction in TEER in 5/5 of the problematic drugs at concentrations at or below 30x clinical Cmax, while the 3 well-tolerated drugs showed no effect on TEER at up to 1,000x clinical Cmax.  The utility of the tissue model for wound healing studies was examined by inducing a 2 mm wound area. Tissues were cultured for up to 10 days and wound healing was monitored by confocal imaging for epithelial cell migration and fibroblast spreading. Tissues cultured in human serum completely healed at day 6 of the culture period compared to >10 days for control tissues. In summary, TEER measurements on the SMI tissue is a sensitive, predictive tool to assess clinically-relevant intestinal toxicity that appears to give improved predictions versus animal preclinical toxicology models.  Furthermore, the small intestinal tissue model can be used to evaluate therapeutics for their wound healing potential.

Widely used vaginal lubricants in the U.S. and Europe are strongly hyper-osmolal, formulated with high concentrations of glycerol, propylene glycol, polyquaternary compounds or other ingredients that make these lubricants 4 to 30 times the osmolality of healthy vaginal fluid. Hyper-osmolal formulations have been shown to cause marked toxicity to human colorectal epithelia in vivo, and significantly increase vaginal transmission of genital herpes infections in the mouse/HSV model. They also cause toxicity to explants of vaginal epithelia or cultured vaginal epithelial cells, and increase susceptibility to pathogenic organisms such as HIV in target cells in a cell culture system. Here, we report that the average osmolality of healthy vaginal fluid collected from eight donors with an average of five samples per donor is 370±40 mOsm/Kg. Using a well-characterized three-dimensional human vaginal epithelium tissue model (EpiVaginal™) we demonstrated that hyper-osmolal vaginal lubricants with osmolality greater than 4 times that of vaginal fluid (>1500 mOsm/Kg) cause disruption of epithelial barrier properties and structural damage. Four out of four such lubricants caused disruption in the parabasal and basal layers of cells as observed histologically. These lubricants also reduced/compromised barrier integrity as measured by the trans-epithelial electrical resistance (TEER). No epithelial damage or reduction in MTT viability was noted for hypo-osmolal lubricants (N=3) with osmolality of <370 mOsm/Kg. The results showed the utility of the organotypic EpiVaginal tissue model for lubricant screening and this in vitro test method confirm the extensive reports of safety concerns of hyper-osmolal lubricants, which strongly suggest that the FDA review the toxic effects of currently marketed vaginal lubricants.

Knowledge of inhalation toxicity and irritation potential is important for development of new inhalable therapeutics, assessment of environmental air pollutants, and for establishing safe handling, labeling, and emergency response procedures for chemicals. Animal models have been traditionally used to assess the respiratory effect of new drugs or environmental agents. However, there is growing awareness and concern that animal models do not always accurately predict human outcomes. Therefore, development of in vitro model systems based on primary human cells has been a high priority in the scientific community. In vitro organotypic airway models
based on primary human airway cells are well established and are commercially available. However, validation of these systems for prediction of in vivo human outcomes is problematic because most available in vivo toxicity data was produced from animal models. Thus, discrepancies between human in vitro data and animal in vivo data may either be model differences or species differences. The missing link for validation is a corresponding in vitro animal airway model. In vitro organotypic airway models of various species including mice, rats and dogs are also well established in the literature, but have been challenging to produce on a large scale. The goal of the current project is to develop a scalable in vitro organotypic model of rat mucociliary airway epithelium to allow for comparison with human in vitro airway models and thus close the loop in the current validation scheme for human-derived in vitro organotypic mucociliary airway epithelium. Airway tissues were obtained from 8-week old, male, CD rats (Charles River). Conducting airways were dissected and epithelial cells were isolated following enzymatic digestion. Isolated cells were seeded onto microporous membrane inserts and cultured at the air-liquid interface for up to 27 days. H&E stained histological evaluation demonstrated a high level of organotypic mucociliary differentiation including a pseudostratified epithelial structure with copious development of functional cilia. Robust barrier function was demonstrated by development of transepithelial electrical resistance of >800 Ω x cm2. These results suggest that in vitro rat airway models may be a promising tool to allow rodent-to-human translation of in vitro inhalation toxicology data, and ultimately a full transition to human-based in vitro models.